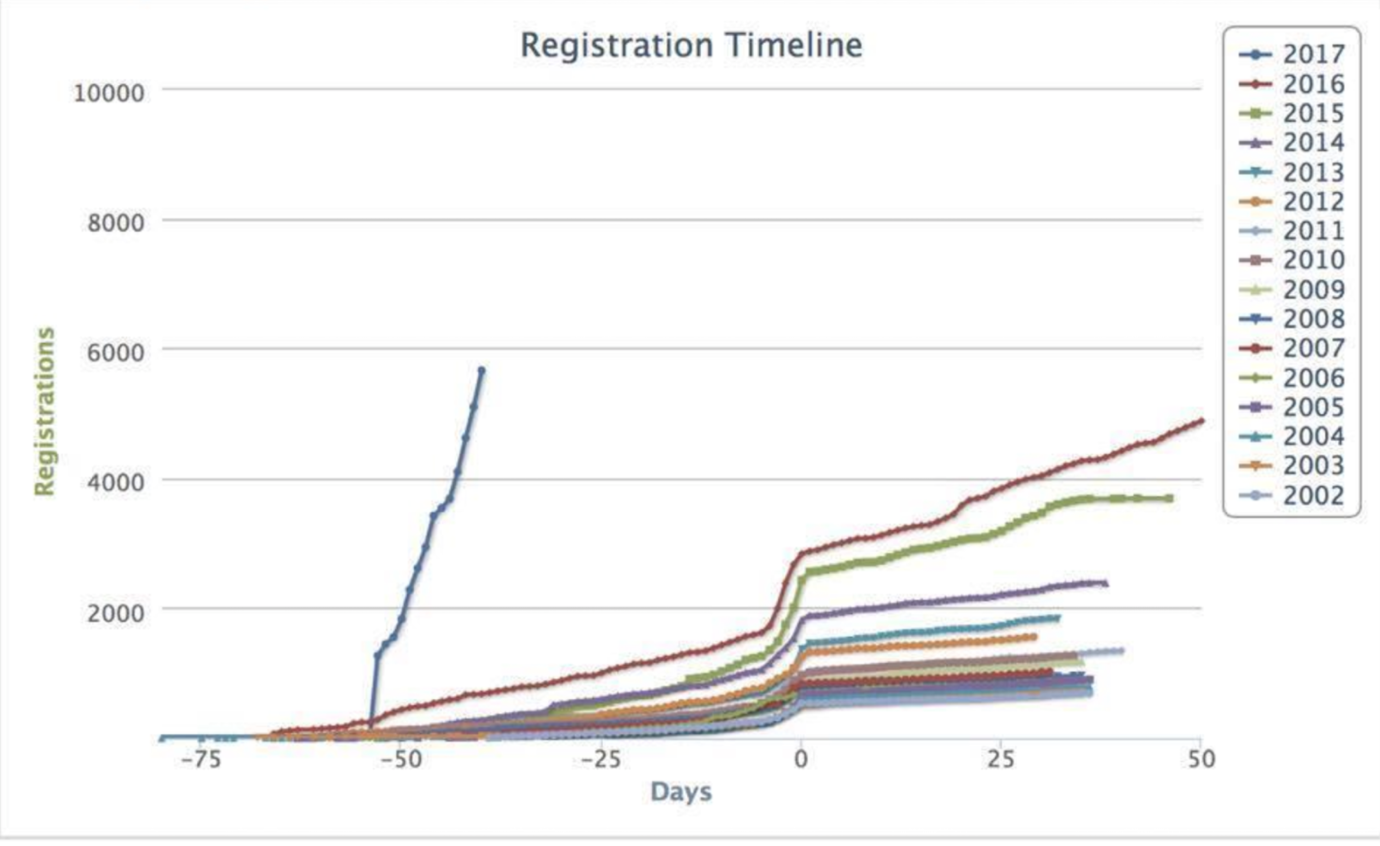 AI hype in one picture.

Hype. Everyone agrees that the hype for NeurIPS 2017 was incredible. Just look at the plot above: the entire conference sold out during early registration. The conference was packed. Big companies were desperately recruiting dewy-eyed and geeky-dispositioned PhD students. There were countless afterparties hosted at luxury venues by Intel, DeepMind, OpenAI, Uber, Facebook, Borealis, CapitalOne, Apple, etc. Intel even got Flo Rida to help them unveil a new chip. You mean the rapper Flo Rida?! Yes. Him. Although I can’t confirm because the bouncer wouldn’t let me in :/ 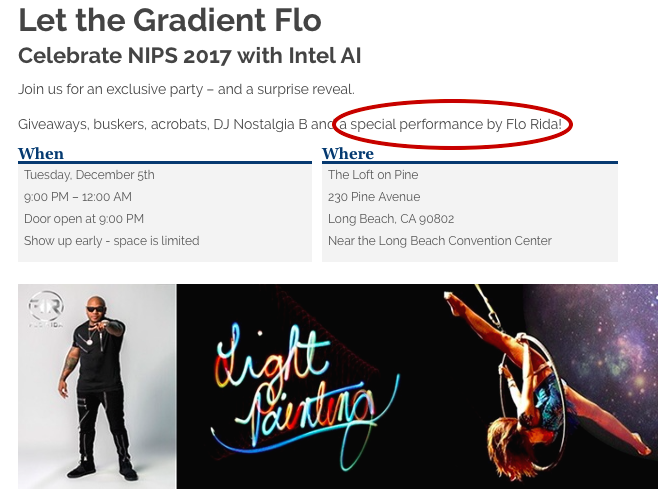 Money. All this sudden hype stems from the fact that large companies are placing big bets on AI. Many of them (Apple, Google, Microsoft, Intel, Uber, Facebook, Amazon) have their own research labs. Scientists at these labs publish papers, attend conferences, and sometimes advise younger researchers, just as they would in academia. The main difference is that their research is generally focused on projects that these companies find useful. I will not want to spend too much time talking about money and AI because this NYT article does a better job. That said, I’ll repost a few of its most interesting statistics: 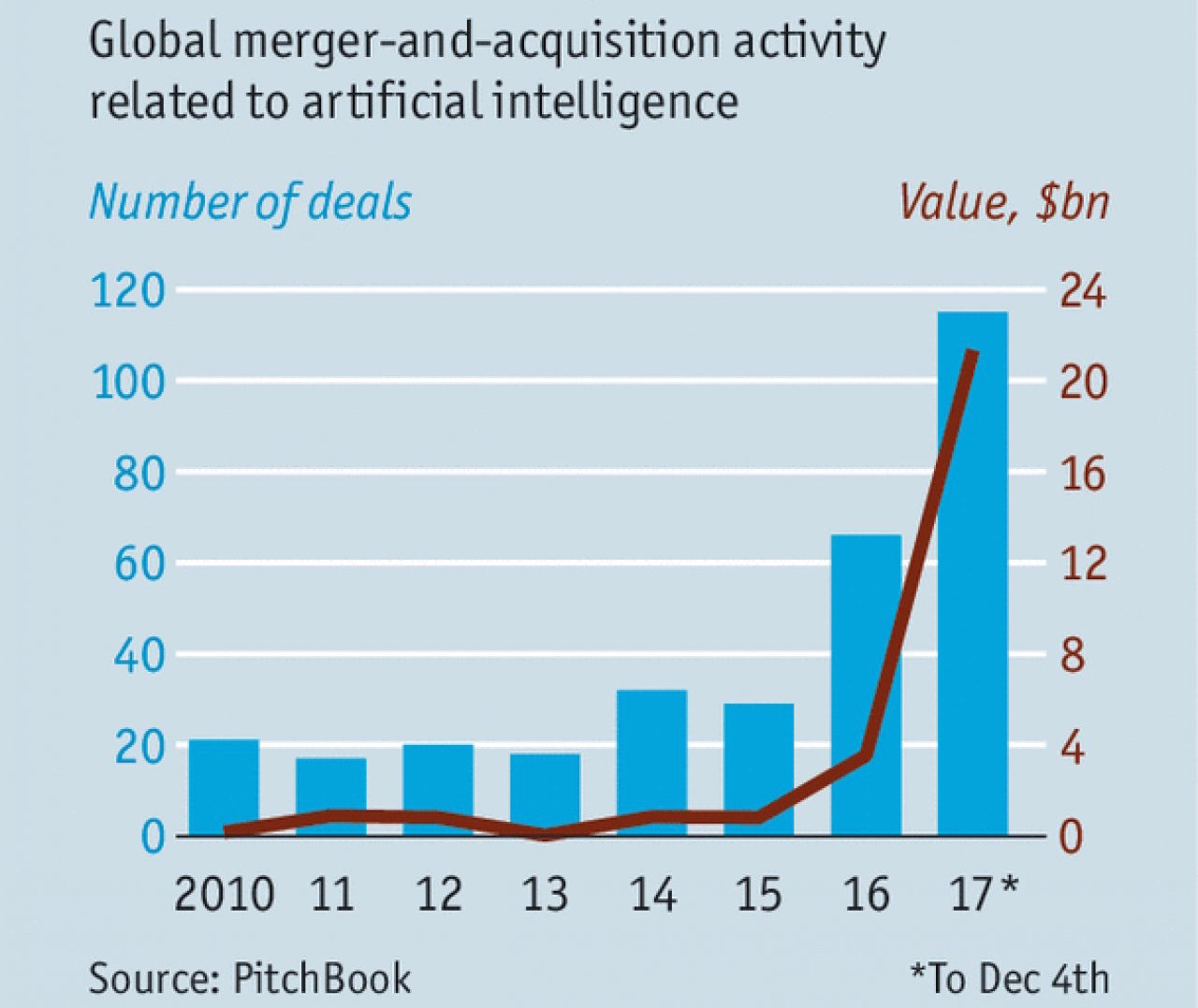 Taken from the Economist.

Impact on research. In years past, one of my advisors explained, NeurIPS was a mellow conference. It was generally aimed at professors and their graduate students. Doing a quick scan over the NeurIPS 2017 accepted papers, I found that the organization with the most affiliated authors was Google/DeepMind/Brain (210), followed by Carnegie Mellon (108), MIT (93), Stanford (81), Berkeley (81), and Microsoft (70)1. So the majority of NeurIPS attendees are still academic, but industry participation (read: Google) is growing. 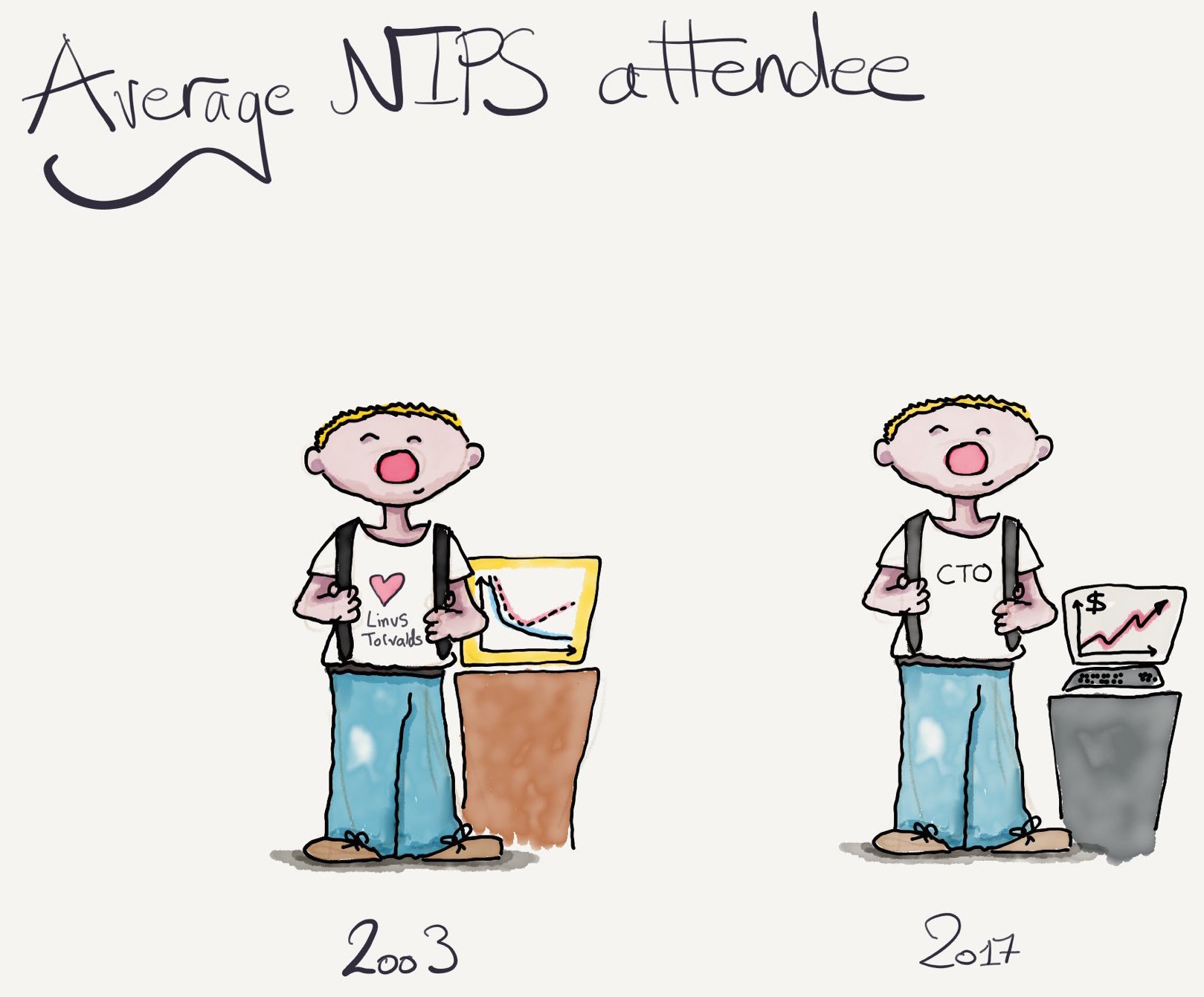 But which researchers are setting trends in the field, and which ones are making relatively small contributions? A quick review of the conference schedule shows that five of the seven invited speakers and 10 of the 19 symposium organizers had industry affiliations. This means that industry-funded researchers “set the curve” at NeurIPS.

After day one, I did my best to look beyond the hype and find examples of people doing good science. My initial pessimism faded and I discovered some interesting themes.

Are we alchemists? Researcher Ali Rahimi received a Test of Time award for his contributions to the field back in 2007-08. He used his acceptance speech as an opportunity to make a strong, controversial claim about the state of machine learning: “it is the new alchemy.” Ali’s point is that we spend too much of our time trying to improve the performance of AI on various datasets and too little time trying to understand why things go right or wrong.

“We’re building systems that govern healthcare and mediate our civil dialogue. We influence elections. I would like to live in a society whose systems are built on top of verifiable, rigorous, thorough knowledge, and not on alchemy.” 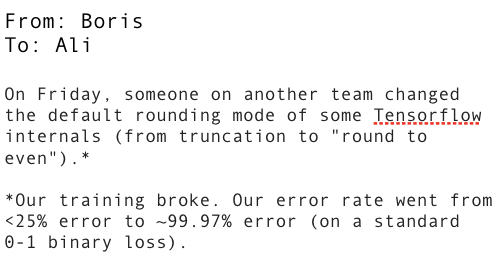 An example of "alchemy" in AI, taken from Ali's NeurIPS keynote.

Several hours later, Yann LeCun posted a strong criticism of Ali’s speech. This debate soon diffused into countless lunchtime and hallway conversations. Whether people sided with Yann or Ali on this, they seemed grateful for a chance to discuss the issue. The machine learning community is results-driven and there have been few forums for these debates until now.

Metalearning. Pieter Abbeel and friends are pushing metalearning. Since he is one of the world’s most respected researchers, this was a huge theme at NeurIPS. The idea of metalearning is to teach a computer how to learn. Instead of teaching a computer how to solve a maze, you would teach a computer to teach itself how to solve a maze. Yes, this is more complicated. The idea is that by “learning to learn,” you get AIs that generalize to new situations effectively.

I think everyone agrees that metalearning is desirable. The real question is how to make it work. Even Pieter was unclear on this point, although he presented a wealth of recent ideas. I especially liked his paper presenting an agent that could explore a maze until it found a target. When dropped back into the maze, the agent used its past experience to navigate quickly to the target.

Deep reinforcement learning (Deep RL). The young and ambitious field of deep reinforcement learning continues to deliver great results. Earlier this year, Google DeepMind published a fourth Nature paper. The team described how to teach an algorithm, which they call AlphaGo Zero, to play Go at superhuman level, starting from zero human knowledge. During NeurIPS they released an updated version which plays Go, Shogui, and Chess at a dominant level.

The problem with deep RL is that it still learns far too slowly. For example, it can outperform humans at most Atari games…but whereas a human needs a few minutes to learn the game, the computer needs to play for hundreds of hours (see slide 15). Talks, posters, and presentations tended to focus on how to make deep RL learn tasks of greater complexity, more quickly. Popular ideas included hierarchical RL, metalearning, and various unsupervised auxilliary tasks.

Interpretability. There was a big symposium (3000+ people) and two workshops about this. The interpretability issue relates to the fact that we often want to get machine learning systems to explain themselves. Consider applications where human well-being is involved: self-driving cars, medical applications, and financial decisions. In these situations, we want humans to trust the algorithms. The best way to do this is to make the computer explain its decision-making process in the way that humans understand.

Between Ali’s keynote, several new government grants aimed at interpretability, and a push among companies to use AI to solve real-world problems, interpretability felt like a central issue this year. I am happy about this because my research – the reason I attended NeurIPS – is centered around interpretability. Here I am giving a talk about it:

Nice talk by @samgreydanus on visualizing and understanding deep RL. I like the @ATLASexperiment sticker on his laptop. pic.twitter.com/YVTGX7M0kc

Disentangled representations. The power of deep learning is that it can transform features at the pixel level, such as color and shape, into more complex ones such as “ears”, “wheels”, or “leaves”. Clearly, it’s easier to explain what is going on in a picture using the latter. The problem is that these concepts get mixed together like a plate of spagetthi. As Yoshua Bengio said (hungrily), “If we can take that spaghetti and disentangle it, that would be very nice.” So we’d like algorithms that discover high-level features like “ears,” “wheels,” or “leaves” that are separable. We’d also like to do this in an unsupervised manner.

I attended a workshop centered around this idea. People whose work and ideas I found interesting included Yoshua Bengio (Montreal), Stefano Soatto (UCLA), Josh Tenenbaum (MIT), and DeepMind’s Irina Higgins, Peter Battaglia, David Pfau, and Tejas Kulkarni. This theme was not big at NeurIPS, but I think it is promising.

I was surprised to find that some of my conversations were not about science at all. They were about the relationship between AI and society. Many of these occurred at the fascinating but sparsely-attended Kinds of Intelligence symposium. This symposium brought together influential thinkers from psychology (Alison Gopnik), neuroscience (Gary Marcus, Lucia Jacobs), deep learning (Demis Hassabis, Zoubin Ghahramani), privacy (Cynthia Dwork), and public policy (David Runciman). 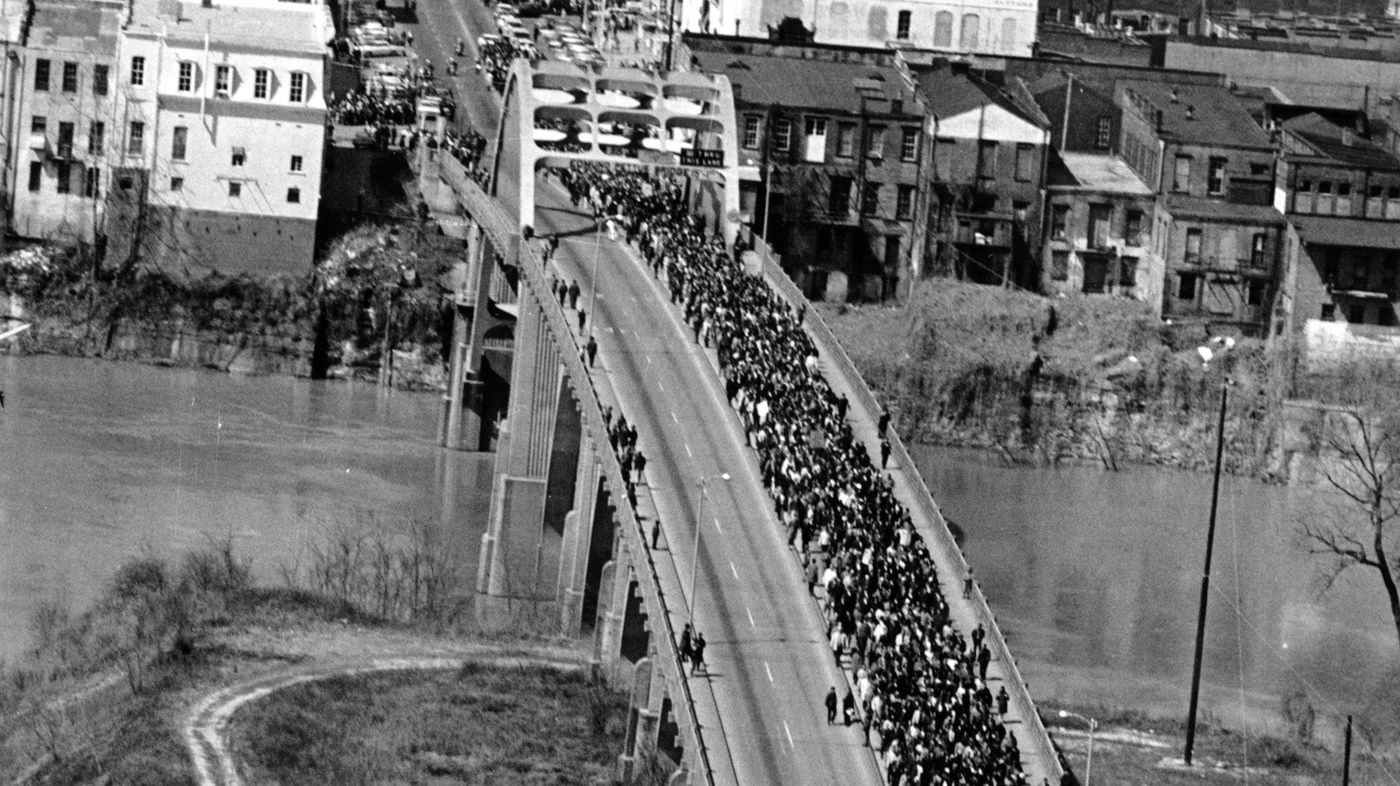 What can we do? Jonnie and I are organizing an informal group, AI for Good, aimed at addressing these issues. If you want to join the conversation, email me and I will send you an application. If you are a US citizen, you should also email your congress(wo)men. I did it and it only took five minutes.